Eight days ago, on Nov. 4, 2020, James Hollingshead made noise in the bodybuilding world by being the first man to qualify for the 2021 Mr. Olympia. Now, he’s making headlines again by announcing that he will forgo competing at this year’s Olympia. However, he is not the first competitor to drop out. Flex Lewis and Cedric McMillan have already announced that they won’t be competing at the 2020 O, which is set to take place on Dec. 17-20, 2020, in Las Vegas, NV.

“The Shed” made his intentions known in a video on his YouTube channel, posted on Nov. 12, 2020. It was a decision he credits making with his prep coach, Patrick Tuor. You can check out the video below.

[Related: The Real Pros and Cons of the Bodybuilding Lifestyle]

“I’m in this place where I sat down, took time to consider all things, and I’m going to be real with you,” Hollingshead said in the video. “After much discussion with Patrick (Tuor), the plan now is to focus solely on improvements, and to shoot for the 2021 Mr. Olympia solely.”

Hollingshead earned the qualification for the 2020 Olympia by winning the Europa Pro in Spain in October of 2020. He flexed his guns and out-muscled Lukas Osladil, who is also qualified for the 2020 Mr. Olympia, for first place. Hollingshead went on to say that competing in the 2020 contest would mean leaving the United Kingdom early due to an impending national shutdown caused by the COVID-19 pandemic. However, he also expressed optimism when talking about his plans.

Despite Epic Qualifying Victories, James Hollingshead Will Sit Out the 2020 Olympia

James Hollingshead is sitting out.

In an endeavor like competitive bodybuilding, many don’t consider the strategic side of the game. So many of the uninitiated simply see athletes who pack muscle onto their frame and step on stage.

But the game is much more involved than that. It requires tactical strategy in order to present an athlete’s best assets. It appears that recent qualifier for the 2020 and 2021 Olympia James Hollingshead is operating with this in mind.

Looking impressive in his last two outings, James Hollingshead definitely has a ton of momentum on his side. Many expected him to step on stage at this year’s Olympia competition. However, it appears that the UK bodybuilder has other plans.

Rather than compete this year, James Hollingshead is choosing to sit out the 2020 show. Why you may ask? Apparently he’s looking to really bring his all for the 2021 Olympia. Below is a statement from Hollingshead about his decision.

The face of a man who is happy with his achievements but knows he has so much more to give.

My bodybuilding up to this point has been show show show, get my self out there best as I can.

Let the judges know I want this as much as I breathe.

Show the people that I am willing to work willing to be judged willing to try and most of all prove myself.

I’ve reached a point now where I have a golden ticket not just because I’m qualified for the @mrolympiallc but because I have ample time.

For the first time I can truly concentrate on the bigger picture….The Main goal the big dream.

I suppose all I want to say is @ptuor this next show is the One the Big one the supershow and we got our pass.

Between now and then we will move mountains to become the best we can be .. for those that have been behind me and those who are now…its going to be Epic.

I can promise that..the next one is EVERYTHING!

What do you think of James Hollingshead sitting out the 2020 Olympia? 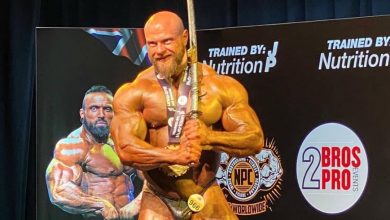